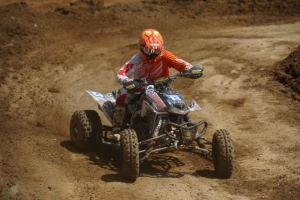 Gregory Ryan Garrison, born June 11, 1979, in Hyden, Ky , the son of Teena Cornett Garrison and Greg Garrison.  He departed this walk of life on Sunday, September 05, 2021 at his home surrounded by his loving family, after years of fighting a hard battle with kidney disease.  He was 42 years old.

Ryan had been a life-long resident of Leslie County, and was residing at Stinnett, Kentucky with his loving mother, whom was his caregiver at the time of his passing.  Ryan was a graduate of Leslie County High School.  He was of the Pentecostal faith, and enjoyed talking about the Lord and praying, especially with his Granny Oulti, with whom he had a special relationship.

By occupation, Ryan was a self-employed heavy equipment operator and logger.  He learned at a very young age how to operate any type of heavy equipment and was the “best of the best”.

He enjoyed watching T.V. shows, Andy Griffith and Hunting Bigfoot.  He loved riding his four-wheelers and would attempt to climb any hill, no matter how steep, and was well known for it.  He was a lover of old muscle cars, and hot rodding in his 1967 Camaro. Ryan truly loved spending time with his family, especially his nieces and nephews, Tyler, Jared, Haleigh and Terrah.  They loved their “Bub Ryan” just as much as he loved them.  Ryan was often described as a “Good Boy” because of his character.  He had the best heart; he was truly good hearted.  He showed kindness and respect to those he met.  He was a true pleasure to be around.  We were often told, “If you don’t like Ryan, you didn’t like anyone”.

We love you “Bubby” and our lives will never be the same.

Funeral services for Mr. Gregory Ryan Garrison will be held at 2:00 P.M. - Thursday, September 09, 2021 in the chapel of Wolfe & Sons Funeral Home with his brother-in-law & best friend, Todd Roberts and Mickey Roberts officiating.  Interment will follow in the Garrison Cemetery at Stinnett, Kentucky with Todd Roberts, Anthony Burkhart, Michael Asher, Jared Asher, Trent Garrison and Tyler Burkhart serving as pallbearers.  The Garrison family will receive friends for visitation from 6:00 until 9:00 P.M. - Wednesday evening at the chapel.

To send sympathy gifts to the family or plant a tree in memory of Gregory Ryan Garrison, please visit our tribute store.